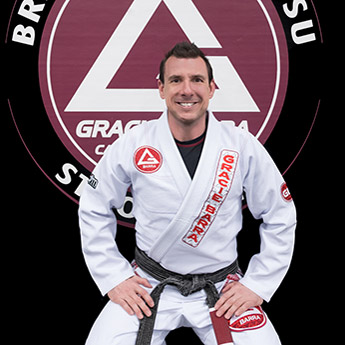 Mike is a master level practitioner of the martial arts with over 25 years of experience and holding 7 degrees of black belt in various forms of martial arts including a 3rd-degree black belt in Brazilian jiu-jitsu under Master Carlos Gracie Jr. and professor Marcio Feitosa. Mike has over 30 Podiums in International, National and State martial arts competition including the IBJJF Pan American, Copa Pacifica, and WKSA World Championship making him one of the most decorated and experienced instructors in the area.

Although professor Mike was born right here in St. Louis, the majority of his martial arts training took place in California, where he lived for almost 18 years. Living in Southern California allowed Mike to train at some of the most prestigious schools and study with some of the best instructors in the world such as Carlos Gracie Jr. During his stay in Southern California Mike established himself as one of the most respected members of the Brazilian jiu-jitsu community becoming the first American technical director named to the IBJJF (International Brazilian Jiu-Jitsu Federation).

“ I, like many instructors have been fortunate to win many competitions. However, I asked to be judged on my quality as an instructor by the performance of my students. Please come in watch me teach and see the level of technique that happens on our mats. You won’t be disappointed!” – Professor Mike Buckels

As of June 15th we are open again! Due to the Corona virus pandemic, at this time we are unable to accept walk-ins or drop-ins. we have social distancing and enhanced sanitization protocols in place for everyone's safety. If you are interested in the program please give us a call or email us to schedule your appointment to come in and talk to one of our staff members.

If you are an existing student coming back from a freeze, please remember that you must use the booking system to book yourself into the classes you wish to attend as we have reduced maximum class sizes in effect for everyone's safety.

See you on the mats!