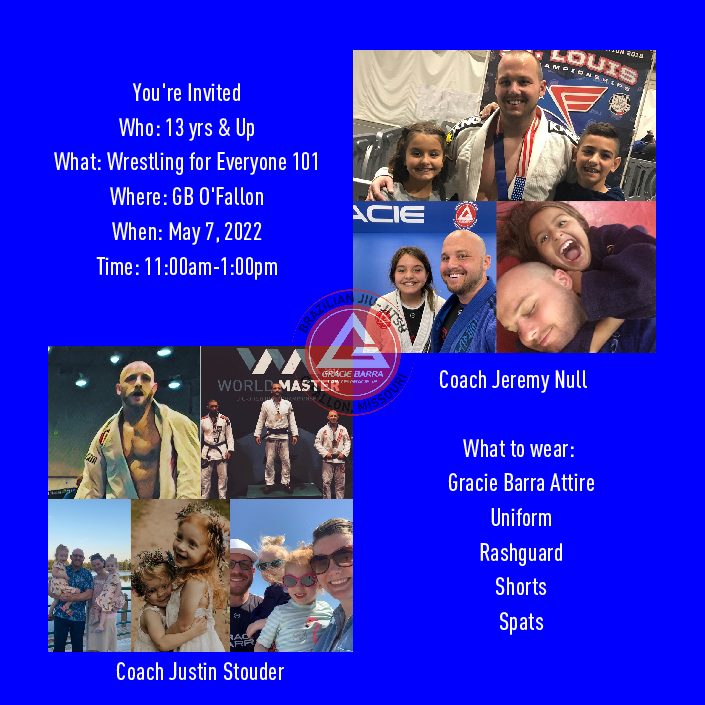 What to expect and highlighting the benefits!

Each instructor has their own style of jiu-jitsu, sometimes related to what martial arts or sports they have done in the past. The newest instructors in our school, coach Justin Stouder and Jeremy Null, have been wrestling pretty much since the time they could walk! We couldn’t be happier to have them share their knowledge on our mats once a week starting this Saturday, May 7th. Like jiu-jitsu, you don’t have to have experience to do the class, you just have to show up and keep learning! Coaches Justin and Jeremy tell us all about what we can expect and what they aspire to bring to the mats each week.

Over the years, we have had several students with wrestling experience and even some of our competitors have gone on to do great in high school wrestling, so there was no difficulty saying no for coaches Justin and Jeremy when the idea of a wrestling class came about.

“Justin and I always kind of discussed it together, and honestly we thought it would be pretty cool. I love giving back and I think that wrestling in general has done so much for me in my life, in my career, and who I am. It’s basically shaped everything about me, as well as my style of jiu-jitsu,” Null said.

Not only will wrestling help build character and add to your jiu-jitsu game, but one of the most important aspects of wrestling that the coaches discussed was the difference in mindset.

“The most important part about wrestling supplementing any sport is the mental aspect. There’s only one way to create mental toughness, and it’s through suffering. Wrestling does a good job of making you suffer and finding yourself. Jiu-jitsu is the continuation of wrestling, in my opinion. You start on your feet, someone gets taken to the ground, and now jiu-jitsu begins,” Stouder said.

This class is going to be offered for ages 13 and up, so it is great for anyone wanting to learn a new skill, work on their takedown game, or improve mental or physical conditions. Although it may be a two hour class, it will have a similar feel to our usual weekly classes.

“I think everyone can expect more of a fast paced, hard-hitting practice. We’ll start slow though, learning the basics of ‘this is what a stance should be,’ breaking things down into steps a little bit differently. The correct way to do different moves, you know.That being said, also I think with wrestling, one of the most important things, my style of wrestling is not super fancy showy type moves. I can teach those, but what I prefer to teach is to get really good at the basics. Basics win matches and we can always spin off from there. I’m a firm believer, in all my teams I’ve coached, the best way to coach and the best way to get better is that we drill very hard, but get better by going live,” Null said.

Justin and Jeremy have had their fair share of wrestling experiences, as both of them have competed in over 1500 competitions and tournaments combined. Much of what they hope to see students participating in the class grasp is the ability to move outside their comfort-zones.

“My wrestling journey has been incredible. It helped me to be comfortable with pain. If you’re comfortable, you’re not growing,” Null said.

It is often said that everyone has their own jiu jitsu journey, whether the goal is for a child to learn discipline, an adult or teenager wanting to be a high level competitor, or even if it’s just a hobby or fun activity added to someone’s life. The wrestling class offers the same experience!

Coaches Justin and Jeremy are super excited to have the opportunity to teach their life-long passion of wrestling in addition to helping people understand how to use it with jiu jitsu in both the gi and no-gi. All they ask is for those who show up to give their best and have fun doing it!

“[I hope to inspire] confidence and grit. Being comfortable being uncomfortable and always striving to do that. You’re never too old or too hurt to do things. Justin and I have gotten older, but also I’ve been competing in combat sports for almost 33 years now, so I have a lot of injuries but you just keep going.  I just hope that I can give back something that I love,” Null said.

Coach Jeremy Null poses with daughter, Junior Leader, Isabella Null at Gracie Barra O’Fallon/ LSL. “I love coaching probably more than I love competing at times. I love giving back and seeing that a-ha moment. Especially helping with the teens, I have gotten a lot of kids college scholarships that have wrestled for me through the years,” says Null. Coach Jeremy spent time wrestling in high school, college, and also the Navy in several different countries.

Coach Justin Stouder wrestling at Francis Howell High School in 2004 defeating a 2x undefeated state champion, both wrestlers going into the match 19-0.  “I was a kid who had an incredible amount of energy and aggression. Some of it healthy aggression as a boy, and some of it not so healthy. It was an outlet where I could take all that energy and aggression. It kind of gave me an identity, but overall, the life lessons it has taught me has made me the entrepreneur I am today, the father and competitor,” says Stouder. Coach Justin Stouder had many college wrestling scholarship offers, but decided not to take them after his second knee surgery.

We are very excited to announce that starting Saturday, May 7th, we will be adding a wrestling class to the schedule! The class will be held every Saturday from 11 AM-1 PM, and it will be taught by Coach Justin Stouder and Coach Jeremy Null! To say these coaches are highly qualified would be a huge understatement! They have a combined 38 years of competition wrestling experience, a combined 20 years of coaching wrestling, and a combined 15 years of training jiu jitsu! This class will be for any student age 13+ unless given special permission from a coach or professor. The coaches will make sure to cater to your exact wrestling goals, whether you are wanting to compete at a high level in wresting or jiu jitsu, supplement your jiu jitsu training, or just learn the basics of wrestling! For class, you will be required to bring Gracie Barra No Gi attire (rashguard and shorts) AND Gracie Barra Gi attire (jacket, pants, and belt). Please feel free to email us at info@gbofallon.com or call us at 636-544-3655 with any questions regarding the new class! Just as jiu jitsu is for everybody, so is wrestling! We are excited to provide you all with another opportunity to improve your takedowns, grappling, cardio, and self-defense!
© 2023 Gracie Barra O'Fallon | Website Design and SEO Services by Web Design and Company